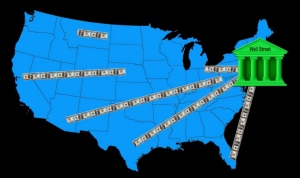 States and cities send billions of dollars in interest payments to Wall Street.

In recent weeks, the City of Santa Fe released its public banking feasibility study which showed the city could save millions if it created a local public bank and the City of Philadelphia’s City Council unanimously voted to begin public hearings on creation of a local public bank. Cities, counties and states around the country are looking at public banking as a way to get out from under exorbitant Wall Street fees. Wall Street financing fees can double the cost of infrastructure projects. Why not self-finance infrastructure projects and save millions?

“The hazards posed to the economy and our savings by risky Wall Street banks have become a major campaign issue in the presidential debates. Some say the problem can be solved with more regulation. But we already tried that with Dodd-Frank, currently the most complicated bill ever passed by Congress — and it hasn’t solved the problem. Dodd-Frank replaces bailouts with ‘bail-ins’ — depositors will be at least partly liable for keeping too-big-to-fail banks afloat. And the massive tangle of new regulations has hamstrung smaller community banks that loan to small businesses, creating jobs. What will replace the banks if we break them up? Publicly-owned depository banks modeled after the Bank of North Dakota can serve that purpose, and partner with community banks to direct credit where it’s needed locally, reduce the costs of government, and eliminate outlandish Wall Street fees and the need for derivatives to mitigate risk.”