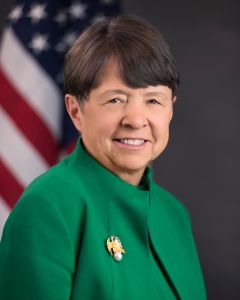 Banking crusader Senator Elizabeth Warren has been on Wall Street’s tail for years. (And that’s why we love her.)

According to a recent blog post at Wall Street on Parade, Warren has been less than impressed with the lax oversight that former Wall Street lawyer and current SEC Chair Mary Jo White has been providing. Recently, Warren sent “sternly worded” 13-page letter to White.

From Wall Street on Parade…

Senator Warren highlighted White’s failure to finalize rules requiring disclosure of the ratio of CEO pay to the median worker; her failure to curb the use of waivers for companies that violate securities law; the SEC’s continued practice of settling the vast majority of cases without requiring meaningful admissions of guilt; and White’s repeated recusals related to her prior employment and her husband’s current employment at law firms representing Wall Street.

Now, Wall Street On Parade has uncovered a major new area of concern. For more than two years now, SEC Chair Mary Jo White has been aware that the most dangerous banks on Wall Street, which are publicly traded securities, have been engaging in “capital relief trades” with hedge funds and private equity firms to dress up the appearance of stronger capital while keeping the deteriorating assets on their books. But neither White nor her Director of Enforcement, Andrew Ceresney, have put a halt to the practice.

Both White and Ceresney hail from the corporate law firm, Debevoise & Plimpton, whose clients include the biggest banks on Wall Street. White spent the bulk of the last 40 years at Debevoise and brought along Ceresney to head up enforcement when she joined the SEC. Ceresney had been with Debevoise since 2005, representing people charged with corporate crimes and securities fraud.

While White and Ceresney have allowed these risky capital relief trades to proliferate in the dark, their former law firm has been gushing over the trades and drumming up business for the murky area. In a Debevoise publication sent to clients in 2013, the law firm indicated it had experience in these deals and said  they “appear to be particularly good opportunities for funds to generate revenue by providing targeted credit support, while retaining the ability to actively deploy capital as needed.”

Debevoise added further: “While it remains to be seen if transactions of this type can be structured in ways that are appropriate and attractive for a traditional private equity fund, it is yet another example of the innovative emerging opportunities for capital providers to make effective use of balance sheet capital as banking organizations adjust to the post-crisis regulatory paradigm.”

In February 2013, Bloomberg News reported one of these eyebrow-raising trades between Citigroup – the bank that blew itself up in 2008 with hidden derivative deals – and Blackstone Group, a private-equity firm. Blackstone had insured Citigroup against initial losses on $1.2 billion of shipping loans, allowing Citigroup to lower the amount of capital the bank had to set aside by 96 percent. The problematic loans remained on Citigroup’s balance sheet according to Bloomberg News.

One key reason for Citigroup’s meltdown in 2008 and the largest taxpayer bailout of a bank in U.S. history was that Structured Investment Vehicles (SIVs) that a big London law firm helped it create, that ostensibly moved subprime debt off its balance sheet, had a trigger unknown to the marketplace that moved it right back on during the crisis.

Citigroup had created seven off-balance-sheet Structured Investment Vehicles (SIVs), totaling $100 billion.  Similar to Enron’s accounting, Citigroup did not show the SIVs in its public financial statements. This allowed it to avoid ponying up capital and reserves while enjoying income of approximately $100 million a year. After it was forced to acknowledge $50 billion of this hidden toxic sludge and move it back onto its balance sheet, its credit ratings were cut and its deterioration to a 99 cent stock commenced. [Read the whole article here.]

I have never heard of capital relief trades before, but they sound like a slick way to keep regulators and the rest of us in the dark.

For some more background, check out this background article from the New York Times.