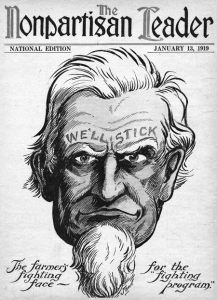 Life was hard in the West at the turn of the 20th Century. Many farms had no electricity or running water. The western spirit was– and still is– fiercely independent, self-reliant, and skeptical of Easterners. Farmers were particularly leery of Wall Street bankers and railroad barons because they believed they were being treated unfairly. Wall Street bankers foreclosed on their farms, while railroads used unfair pricing schemes against farmers. That stubborn Western spirit coupled with a deep-seeded distrust of Wall Street was the atmosphere that spawn the Nonpartisan League.

During the first progressive era, a wave of prairie populism fanned out across the western states. The Nonpartisan League flourished in bread basket states like North Dakota, Kansas, and Minnesota and spread to the Midwest and Pacific Northwest.

Nonpartisan League members ran for the state Legislature and staged a “revolution” in North Dakota. This resulted in a series of reforms including creation of the Bank of North Dakota, the only public bank in the US.

Fast forward to today, and the public banking movement is closely linked with the New Progressive Era in Western states like Arizona. Arizonans for a New Economy is a direct off-shoot of Progressive Democrats of America (PDA) Tucson Chapter, whose members began working on public banking in 2011.

Today, Arizonans on the left and the right of the political spectrum are talking about public banking, and during the 2015 Legislative session several bipartisan bills related to public banking are currently being debated.

Public banking and progressive action are fanning out across the Western states… again. Check out this article for details on the public banking movement in Arizona, New Mexico, Washington, and Colorado.

How Public Banking is Winning the West