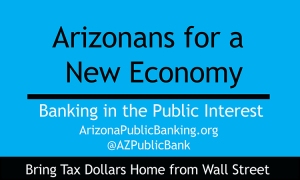 Austerity is a lie.

We have plenty of money.

The problem is that it is being gambled on Wall Street, instead of being invested on Main Street.

That is the message of public banking.

The State of Arizona– and 48 other states– allow billions of  dollars in taxpayer funds to be invested for the benefit of Bank of America, JP Morgan CHASE, Wells Fargo, and other Wall Street banks who our hold rainy day funds. Shareholders in those “too-big-to-fail” banks make money on OUR money, while we are told to “tighten our belts”. The only state whose economy didn’t crash in 2008-09 was North Dakota because the State of North Dakota created a public bank in 1919 and invests its money at home, rather than allowing Wall Street to invest ND funds for the benefit of Wall Street shareholders. Forty percent of the world’s banks are public banks, but there is only one in the US because our country and our government are controlled by Wall Street.

The most promising bill is SB1395, proposed by Southern Arizona Senator Andrea Dalessandro, a long-term public banking advocate which would establish a task force to study the feasibility of establishing a state bank of Arizona. SB1395 will be heard by the Senate’s Financial Institutions Committee on Wednesday, February 18, 2015.

Three members of the committee are strong public banking supporters: Committee Chair Senator David Farnsworth (R) and Senator Steve Farley (D). Yes– this has support from both sides of the aisle.

Farley, Farnsworth and other Democrats and Republicans also have sponsored several pieces of legislation this session that would look at public banking issues.

Public Banking the the Arizona House

On the House side, Representative Juan Jose Mendez has proposed HB2270 to establish a state bank. Although, establishment of a state bank is the goal of Arizonans for a New Economy, we see several problems with HB2270.

It’s exciting that both Republicans and Democrats in the Arizona Legislature are are considering public banking as a nonpartisan economic solution to raise revenue without raising taxes.

My Tweets
Join 900 other followers