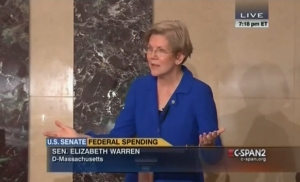 Massachusetts Senator Elizabeth Warren says when CitiGroup can sneak deregulation into a must-pass governmental budget, it has too much power and should be broken up.

In a fiery but measured speech on the Senate floor, Massachusetts Senator Elizabeth Warren blasted the close ties between CitiGroup, Congress, and the Clinton, Bush, and Obama administrations as Wall Street “cronyism”. Channeling trust-busting, progressive President Teddy Roosevelt, Warren called for “opening up Dodd-Frank to make it tougher” and for an end to “too big to fail” banks.

“Let me say to anyone who is listening at Citi, I agree with you that Dodd-Frank isn’t perfect,” Warren said, looking directly into the camera. “It should have broken you into pieces.” [Full video after jump.]

Warren and other progressives are riled up because Congress inserted a Wall Street deregulation clause into the federal government budget bill which the House passed last week. This provision– written by CitiGroup lobbyists– weakens the Dodd-Frank Wall Street Reform and Consumer Protection Act, allows Wall Street banks to return to the risky derivatives trading that sparked the worldwide financial collapse of 2008-09, and paves the way for future Wall Street bank bailouts. The fix is in for more gambling withour money.

“Democrats don’t like bank bailouts. Republicans don’t like bank bailouts. The American people are disgusted by Wall Street bailouts. And yet here we are five years after Dodd-Frank with Congress on the verge of ramming through a provision that would do nothing for the middle class, do nothing for community banks, do nothing but raise the risk that taxpayers will have to bailout the biggest banks once again,” Warren told colleagues on Friday. [Her emphasis.]

When a provision “written by the largest recipient of bailout money in the history of the country” is inserted into must-pass federal budget fill, that corporation has too much power, according to Warren. What we have witnessed is CitiGroup deregulating itself, with the passive consent of the Congress and the active backing of the executive branch. (The US Senate is expected to vote on this on Monday, December 15, 2014.)

The worst part of this story is that President Obama and Vice President Biden showed their true Wall Street colors and called House Democrats, urging them to vote for the budget and Wall Street deregulation (just six years after the crash.)

Reminding her colleagues that President Teddy Roosevelt– the legendary trust buster– said big corporations should be broken up when they hold too much political power, Warren said that when a corporation is so big and so powerful that “it can hold the entire country hostage. That alone is reason enough to break them up.”

“Enough is enough with Wall Street insiders getting key position after key position and the kind of cronyism we have seen in the executive branch.

“Enough is enough with CitiGroup passing an 11th hour deregulatory provision that nobody takes ownership over, but everyone will come to regret.

“Washington already works really well for the big corporations and the lawyers and the lobbyists, but what about the families who lost their homes or their jobs or their retirement savings the last time Citi bet big on derivitives and lost?

“What about the families who are living paycheck to paycheck and saw their tax dollars go to bailout Citi just six years ago? We were sent here to work for families. It is past time for Washington to start working for them.”

It is highly likely that this budget– which takes some $90 million from the Women, Infants, and Children (WIC) program while giving more than $450 million to the Pentagon for fighter jets it doesn’t want and setting up another ruinous Wall Street bailout– will pass the Senate and be signed by the president.

The fix is in, people. Some are saying that 2015 will be a big year for public banking, with multiple bills in play in state legislatures across the country including Arizona. If the sates don’t want to lose their shorts again in another Wall Street bailout, it’s time for them to create state banks and bring taxpayer money back to Main Street.

Here is the whole speech. (BTW, this video has had 42,000 views on YouTube in less than 24 hours. People are paying attention.)